One of my early textile designs recoloured in Photoshop on a Mac around 1991 or '92,
with a Cally-fied Apple logo on top to show that Apple made it all possible.

Update 6th October: I was really sad to hear that Steve Jobs died yesterday. Hopefully my original post below says something about the impact he had on my life and work. He will be missed.

I was sad to hear about Steve Jobs resigning his post as CEO of Apple last week.
I feel a bit anxious at the thought of him stepping back and how that might change things at Apple, though he is not leaving the company, just that role and the involvement it required. With PMS raining down on me like a storm it's no wonder I got a bit weapy as I watched You Tube footage of him giving a commencement speech to the graduates of Stanford University in 2005. I'm such a Nerd, I'd have loved a speech like that at College instead of the stuff I often struggled not to sleep through.

He is definitely someone who has literally had a big impact on the quality of my daily life for more than 20yrs. His visions, brought to life, made my work not just possible, but pleasurable and my old Macs are still Iconic objects in my house.

The only Mac I owned but haven't kept is the PowerMac 7500, designed during Steve Jobs absence from Apple and definitely not an icon of it's time the way the other's have been. Thankfully he came back and before long the Mac Cube, then iMac and then iBook were born and computer design has never been the same since.

I've never had a Mac die on me, ever, or get a virus, so they were great value for money even though they were often twice the price of others. They all still work and were only upgraded because they were getting too old to work efficiently with modern software and internet developments. The 7500 was given away after my Cube came but the others live on and have all retained some value as still valid useable Macs or collectors items.

5 Mac's we've each had or shared since 1996. Spot the one that didn't have Steve Jobs involved?

I've added things I was typically working on on each Mac and it's interesting that the newer the Mac the more I work with old designs and pieces from my early college days. At the moment I'm slowly updating 1000's of my old textiles designs and patterns to jpgs and getting them into some sort of order to actually get some of them printed. I'd never dream of doing that without Apple and Adobe on my side.

My Own and Mr P's Mac's:
1996: Mac Colour Classic
Shared - Ex work freebie soon replaced by the workhorse that follows
1997: Power Mac 7500
Shared - End of line sale - for our Graphics business, lumpy but efficient
2002: Power Mac G4 Cube
Mine - Refurbished ex-display bargain, rekindled my true love of Apple
2007: iBook G4
Mr P's - but I was never off it, what a glossy white delight
2011: MacBook Pro
Mine - Unbelievable Birthday Present, Thank you Bro, thank you forever

I had my first play on a Mac in Macy's in 1984 but never saw one again until the next year when and American came to stay with us and brought his new Macintosh 128k with him (he carried it as hand luggage). It was great, so dinky for a desktop computer at a time when IBM PC's where huge. And it had the mouse, (remember, that thing that IBM said no-one would ever use). I drew a picture of a camel and a palm tree beside of a pyramid (auto filled with brick pattern - mind blowing technology at the time). My first digital image, I loved it. I still have it actually, in a folder somewhere, it looks like it was done on an Etch-a-Sketch but for the times it was astonishing that you could do graphics on a home computer.

When I went to various Colleges they were all to do Art so Mac's were pretty much standard throughout and were in colour by then. It cemented my loyalty to the Mac and introduced me to another love, Adobe, initially through Photoshop, then Illustrator and finally InDesign. It's a shame Apple and Adobe have fallen out, I feel like a parent watching their kids fighting and knowing that the family would function better if they just got along like they did when they were young. Business and ego's tend to spoil a lot of good things.

The Cube and Apple Studio Display were my most exciting purchase. More than I could afford but utterly worth it. My quality of life literally improved overnight. Quiet drive, fast and space saving. They needed 80% less desk space and every inch counted when I worked from home in a tiny flat. As a delightful bonus it came with the new kid on the block, iTunes, and we all know where that has taken us. I couldn't have loved 2 inanimate things more. 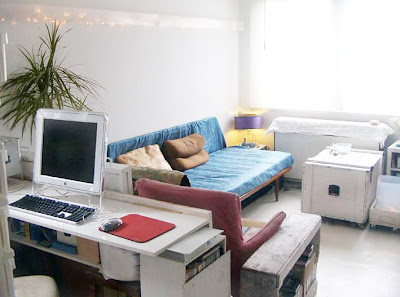 My old flat in Edinburgh in 2002, with Apple Display and Cube (peaking in on left edge)

In the past it was mainly people doing creative jobs that used Macs because they were so geared to visual and audio performance and software, but thanks to iPods iPhones and iPads more people are seeing the benefits of beautifully designed things. I am concerned by the frequent and obsessive upgrading which seems incredibly expensive and wasteful but I suppose that's just endemic (right word?) Western Culture these days. I never upgrade until I really truly need to because I can no longer use my existing software.

Anyway, the change in people's buying patterns for phones and music has clearly tempted some to change their computers too (Yay and Welcome!) and I noticed on Friday that the stats page on Blogger was showing something I'd not seen before, Mac OS users being greater than Windows users with 50% of blog visits coming from Macs. Steve Jobs, you are vindicated, good design does matter, people will pay more for the effort to develop it and was/is worth pursuing. 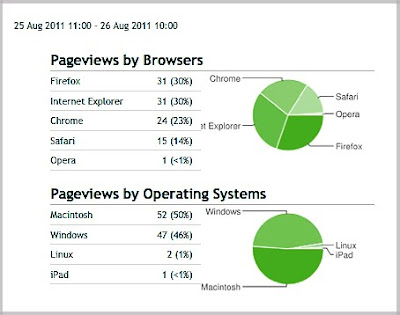 It shows also that Firefox is tied with Internet Explorer. I'm surpriseed so many still use IE but I suppose people like what they know and often use what is pre-installed (hence the Safari users, sorry Apple, Firefox beats Safari hands down for me). I highly recommend you try Firefox if you haven't already. Imagine if people had refused to use Google because it wasn't a Microsoft product?

I have used other PCs in various jobs and they only confirmed for me that the extra cost of my Macs over the years was totally justified and that I never, ever want to use Windows or Internet Explorer if I can possibly avoid it. At Ikea I got my Department buy a Mac (until then I was taking all my work home to do on my own computer in my own time). Suddenly people went from rarely using the Dept. PC to fighting over time on the new Mac, the passion of the convert. Within a year they had to order another to meet demand and have been getting Macs ever since.

I know that Windows has incorporated lots of Mac OS stuff these days and is no longer visually hard to bear, but I still prefer Apple's commitment to looking forwards instead of playing catch-up. I hope they can keep doing that now that Steve Jobs isn't fully involved. Looking after your health is important and hopefully taking a step back will mean he and his forward thinking brain and instincts will be around to keep an eye on Apple's direction for a long time to come.
Labels: gadgets, graphics, green, grey, my creative life, my things, my work

You sure are a mac freak! So am I to a certain extent. I love them. I've worked with PCs but they drive me absolutely crazy. Want to throw them against a wall. You do know much about those wonderful machines! (You should send your text to mr Mac himself, Steve Jobs. Isn't that just the kind of text you would love to read in his position?)
I've used mac since 1991. Would never dream of any other computer. I recommend them to everybody, too bad they're so expensive.
Very little trouble with them. The thunder took one of them. Very reliable.
So glad you seem to feel better and are able to blog. Lots of health and luck in the future to you Cally!
Best regards
Stina
Sweden

Thanks Stina, I laughed in sympathy at your 'throw them against the wall' comment. I've felt exactly the same so many times on other PCs. My old Macs may have annoyed me as they slowed with the strain of modern technolody they weren't designed for but even then I never wanted to smash them up because they still did the job.

Nice post, and as a PC I have a dirty confession to make about early dabblings: http://i.imgur.com/uxwRr.png

I had to laugh at the 'spot-the-non-jobs-device' - it looks just like my first cheap PC did (from V-Tech!).

Ah Bro, funny, like the glaekit expression, I take it that's at school? It's reminding me of when jobs did iMacs and everyone was scandalized that he was getting rid of floppy drives, and the PC folk said no-one would be able to use Mac's in future.