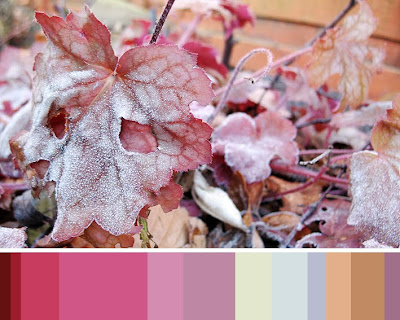 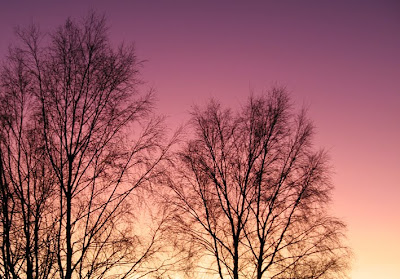 After the last post of silvery frosted leaves I wanted to show that the garden isn't without colour. And Liz, the little colour palettes are for you, so you could see what the family version of my plant book looks like in places.

The Hydrangea above it was a bit of a surprise, I was convinced the heads would have been ripped apart by the gales but the constant winds all year have toughened up all the plants so many things have held up well. Although I'm not really a fan of bright blousey Hydrangeas I do love them once they start to fade though I'd never seen them that way until I inherited this one with the garden.

Heuchera 'Georgia Peach' is a favourite with varying shades of deep pinks, mulberry and marmalade shades depending on season and weather conditions. I've got several new Heucheras with equally wonderful colours but they are tiny plug plants just now. Heucheras take a long time to bulk up in my garden so I'm giving them 3 years until they have enough leaves for good photos.

We've not had as many lovely sunsets as usual so when I spotted this one I had to capture it. If only I could have successfully photographed the 1000's of starlings that were doing their daily sunset flight in front of it. Absolutely mesmerising, but impossible for my camera to capture in such dim light.
Labels: flowers, foliage, garden, orange, pink, plants, purple, Scotland, seasonal

Beautiful shots...love the pinks and purples! I honestly think Hydrangeas are most beautiful after the flowers have faded, like this...they have such a fabulous range of subtle, sophisticated colors.

Beautiful unusual colors for winter!
Thank you for you lovely comment on my blog,
C