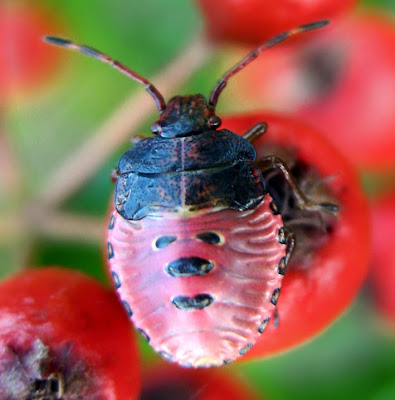 Look at the Panda faced little fellow I founf in the garden this month. It's a mid instar nymph of a Hawthorn Shield Bug. There are very few Hawthorn berries around but they clearly like the Pyracantha too and get the goodness out of them with what I call their 'doober' a little sucking tube, which may or may not be similar to the proboscis of other insects. I know with butterflies they can curl theirs up whereas the shield bugs tend to tuck theirs under their body when they are not using it. I don't know what they eat the rest of he year but they are vegetarian. 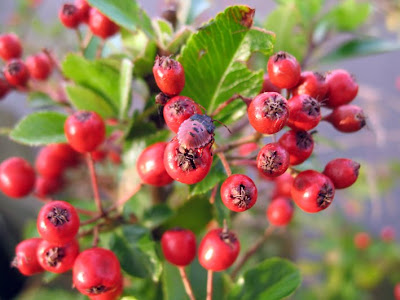 Hawthorn Shield Bug hiding out in the Pyracantha berries 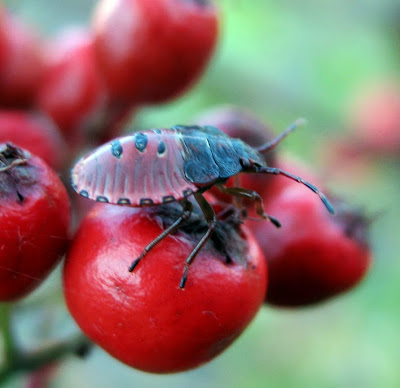 The distinctive red of this fellow is already beginning to take on some hints of green, which can be more clearly seen on the photo below from a week earlier. I didn't even realise it was there till I checked my berry photo's and spotted it. When I went out a week later he/she was still on the same clump of berries, posing for the shots above (too windy for good focus). 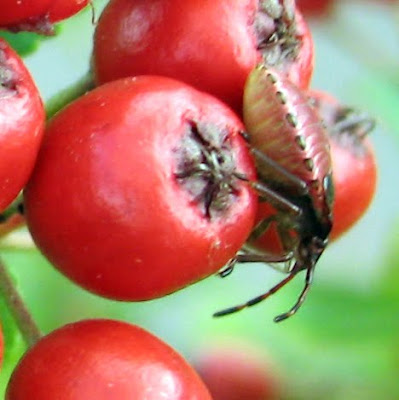 The webstite British Bugs is great for Identifying theses sorts of critters and shows photos and illustrations of them at all difference life cycle stages. I'd seen the much larger adults before but I'd never seen the tiny and variously coloured young. I'm very happy to have a garden they like since they are becoming rarer in Scotland. Below is an adult one I spotted in April and which I tend to see around the garden from time to time. I had no idea about all the variations they go through before adulthood. 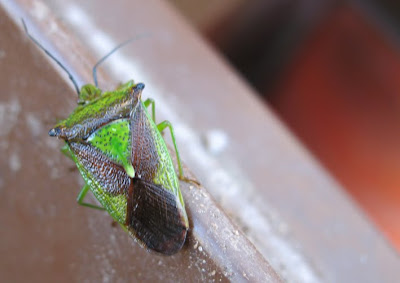 I'll be watching out for the wee thing over the coming weeks to see if I can photograph it as it turns green and grows bigger, though perhaps it will move elsewhere to blend in.

Another first was spotting a 5th instar nymph of a Parent Bug beside my Sweet Peas, I managed to get it onto a broken terracotta pot for some photo's before returning him to the foliage to hide. 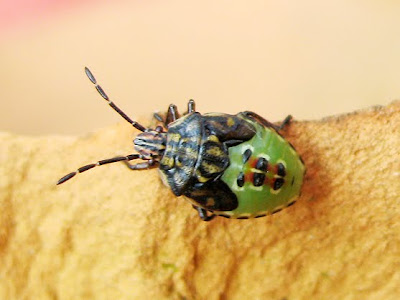 It's hard to believe but the wind here still hasn't stopped, I'd hoped the tail end of Hurricane Katia would mark the start of a calm period but I was very much mistaken. Last week continuing gales trashed my coldframe and lots of the propagated plants inside. They represented months of time and love and were going to make a huge difference to the new bit of my garden next Spring, and for filling out gaps left by winter casualties.

I've saved what I could but it was a very sorry mess, and now I have nowhere to house the 100's of plants that need winter protection. Time to cobble together something that can handle wind, rain, pest invasion and possible heavy snow (and on that note the men still haven't replaced the garage roof that collapsed in the snow in December).
Labels: 2011, garden, green, insects, plants, red, Scotland, wildlife

I have seen the hawthorn bug in my garden, but I didn't know its nymphs had such a beautiful color!