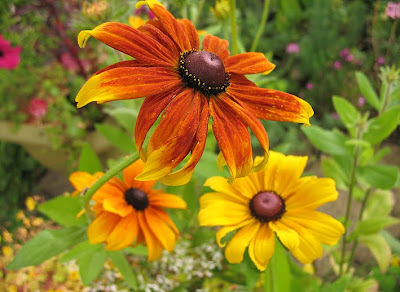 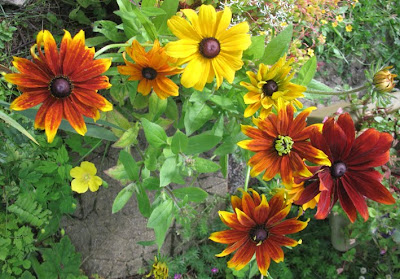 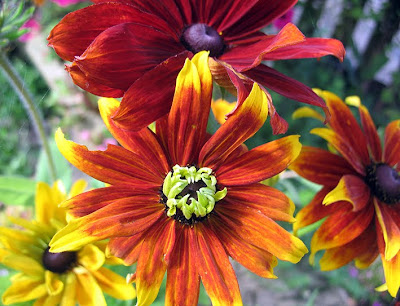 Damn slugs completely demolished several perennials this year* including Helenium and Eupatorium, but these Rudbeckia 'Rustic Dwarf' have almost made up for the loss with their late summer colour. I have a few perennial Rudbeckia but these ones were sold as Half Hardy Annual seeds so I was most surprised to see them growing with great gusto in this their 2nd year (having not been very impressive last year).

Not only are the much more floriferous with the flowers sporting several colours, every one of them like an autumn roast dinner, but they also grew to twice the height, about 2ft instead of 1ft and have the happy habit of being ignored by the slugs. I'm hoping they'll return every year, but to be sure of more I'll sow what remains of the seed packet. Even in areas where I only put a few (to test where they'd be happy) the individual flowers that have arisen have been so varied that they give lots of delight. This and my perennial Rudbeckia plants are all tracked here.

* we couldn't do the usual protective measures because the constant rain made the clay soil/grass inaccessible for most of the year.
Labels: autumn, flowers, garden, orange, plants, summer

Cally, I love the rudbeckias, they add just the right touch for fall and keep reseeding themselves. Your color combinations are especially stunning, so very pretty! The only problem I have is powdery mildew at times, but it's still worth growing for the show.

Great photos. Nature is a strange entity. We grow bougainvillea in a pot on our balcony, unsuccessfully. We gave up on all the advice last year and this year, we just ignored it, thinking we would pot something different. What happened? Exactly like photos! Our bougainvillea was sad and neglected but in FULL bloom! That's life! :)

Too tired to read but here to feast my eyes! Your new website looks gorgeous! How far your creativity extends! Thanks for your comment a while back, when I see your name my heart beats faster, because I know it's a rare occasion. Autumn greetings, Marion