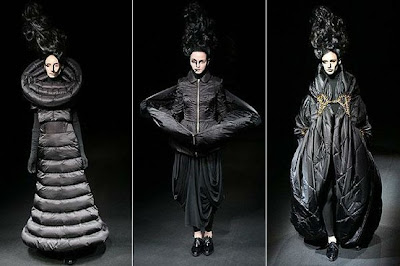 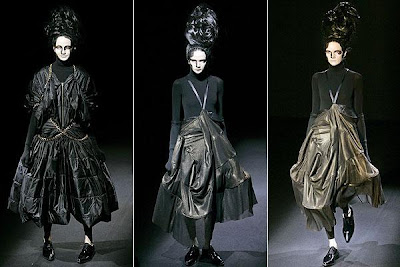 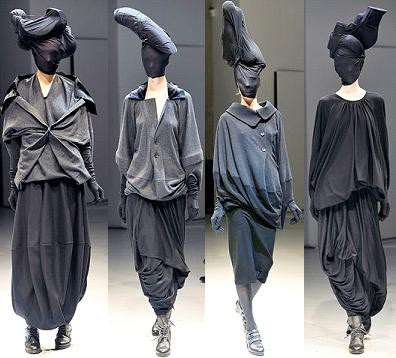 When friends say they don't have anything to make a fancy dress costume with I always remind them that you'll never be stuck for a costume if you have some old tights and a bin bag (panty hose & trash bags). Several of my best, indeed 1 prizewinning, outfits were made with those basics and perhaps some wire or cardboard scraps, or a bit of tinfoil to tweak my own clothes into creations fit for any costume party.

I've had a LOT of fun over the years stretching old tights over shapes to make weird headwear but beware, I found out, to my great dissapointment, that sometimes people think you've made a bad attempt at being Guinan (Whoopi Goldberg) from Star Trek.

The collection above by Designer Junya Watanabe is clearly not made from bin bags and tights, but the effects are similar, albeit painstakingly sewn and crafted, not held together with glue, pins and tape like my 'collections'. The point is that you just need to use your imagination a bit. Costumes don't have to be about recreating something that already exists. Some people may look at you with bafflement if you don't dress as a character but don't let that stop you coming up with something creative and original if you are feeling inspired.

Update: A follow on post shows the work of Hendrik Kerstens who uses a plastic bag to style his daughter like the Dutch Masters.
Labels: black, creative people and things, fashion, fun, Halloween, my creative life, seasonal