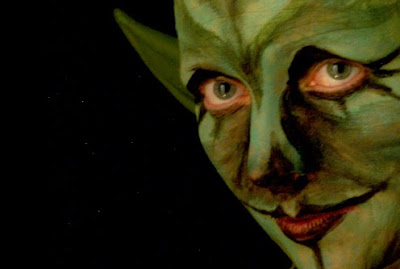 Elf, Goblin, Sprite? I just painted in a way that suited the ears I'd been given. 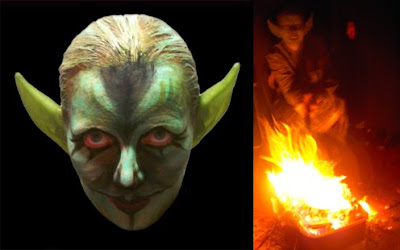 A friend gave me her green ears • sitting by the fire

Here I am as a Goblin type of critter in 2005. It was a mild dry October that year so we had the party outside around a tiny barbecue based bonfire with orange tea light lanterns and pumpkins around the garden. 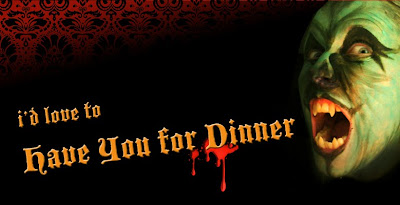 When I was a kid I absolutely LOVED it when we were out Guising (Trick or Treat) and would occasionally go to a house that had made an effort to be spooky. In the 70's it was very rare to encounter that and I vowed when I grew up I'd always dress up for the Guisers. Since Asda in the UK was bought by Walmart there was a definite importing of Halloween as a commercial concept and all the other supermarkets have followed suit so Halloween themed houses are much more prevalent these days, but I far prefer a home-made look rather than a bought one and for me getting creative is the most fun part of Halloween. Having ME has meant not a lot of partying but having had a nice Fancy Dress dinner for 4 last year I decided to increase that this year and tweaked the Elfish Goblin with some fangs to make the above e-vite for it.
Labels: black, fun, green, Halloween, my creative life, orange, seasonal

Those are some freaky looking goblin faces! I'd never have recognised you.

Mind you I did walk right past you in my stairwell that time you threw a wig on, so I'm easilly fooled :-/

Hey Bro, I'd love to paint your face some time, bet I could get you looking really different too. Hope you have a good Halloween, and maybe some kids may come this year so you don't get left with a bowl full of eyeballs and what not to eat all week.