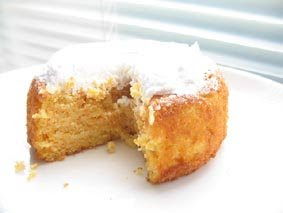 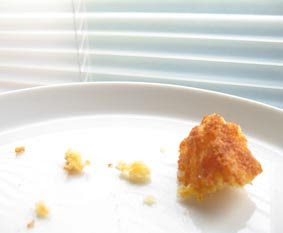 Thank you all for your birthday wishes on the previous post, they made up for not having a meal or a cake or even a present from my best friend (it's sitting there in a bag but Mr P is so scatty he still hasn't actually given it to me!). My birthday cake arrived belatedly today. It was part of the vegetarian selection pack from Droppa and Droppa, £19.99. It's all wheat and dairy free so I can munch without trouble. So far I have only eaten the mini carrot cake, and OH what a moist DELICIOUS cake it was, and not as mini as the name implies. Incredibly good, I'd never have guessed it was wheat free. The pack includes a little chocolate cake, bread, rolls, teacakes, a spanish tart, a vegetable pasty and a 'cheezy' leek and potato pie.

The cake is not the only thing that was here one minute and gone the next. Yesterday Mr P had a cancellation so was free to take us for a drive to the hill to walk Lucy. We were only away for an hour but when we got back the trellis that stops Lucy escaping out of Mr P's garden was stolen!

::I've moved the details to the comments section of this post, but here is the picture of the missing trellis which has been spotted in the garden of our new neighbours!!!! 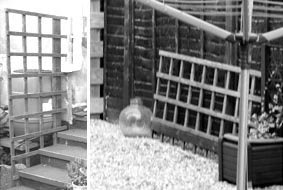 Left: in my garden 2007
Right: in neighbour's garden today!

Mr P plans to talk to the neighbours at the weeekend so I will let you know you next week about the outcome. Till then, I shall control my frenzied thoughts with that veggie pasty. 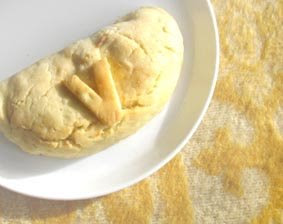 Update - the pasty was really nice as was the 1/2 toasted teacake I tried and the 1/2 of chocolate cake! What a pig. What a happy pig.

PS for those who showed an interest in my mention of Cesar Milan I can wholeheartedly recommend watching his Tv show The Dog Whisperer :: the rest of this section has been moved to the comments for this post 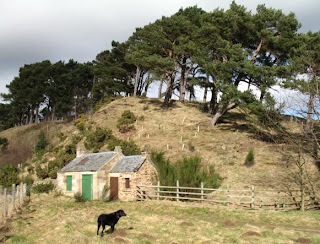 Cally, that is awful about the trellis! I too dislike confrontation, but you need to say something. If you try to just take it back then it might escalate into something worse. You are armed with pretty good evidence. Be as nice as you can...kill them with kindness...but stand firm! Good luck!

Re. Cesar Milan - The Dog Whisperer

For those who showed an interest in my mention of Cesar Milan I can wholeheartedly recommend watching his Tv show The Dog Whisperer (Sky 3 in the UK, not sure about other countries). If you can't get him on TV you can order videos on the website. Though his written tips are great it's very much a watch him do it thing - it's all about body language and sensing their energy, and most importantly of all, being aware of your own energy. He always emphasises the HUGE importance of being 'a calm, assertive pack leader' with your dog. He gets results so fast and without being aggressive, loud, harsh or violent. He does use strong physical touch to pin dogs down sometimes, and the 1st time I watched I thought he was being cruel, but watch more and you totally see what it is that he's doing, and it isn't bad. It's just replicating the way the mother dog would discipline her own pups. His techniques have been a godsend for me because walking a dog when you have M.E is no 'walk in the park' if your dog, or other people's dogs, behave badly.

With Cesar's instruction I can now get Lucy to walk beside, or even behind me, off the leash, right beside a field of pregnant sheep. 6 months ago she would have run at them barking. I still have trouble with her if she sees someone she thinks she knows, she will run right across a road to see them so I can't have her off the leash if there is a gap in the hedge of a field, just in case she runs through. When I've got more energy to talk to people I will be able to get some helpers to work with me on that one - I need them to appear in fields so I can practice calling her back calmly (I can't help it, when I see her run to the road or to someone who might be afraid of dogs I panic.

Re. The Missing Trellis

The Trellis wasn't attached to the fence because we move it when we need to use the gate. As Mr P was about to go in search of it (incase kids had pinched it and left it nearby) he spotted a suspiciously similar piece propped against the back fence of his new neighbour's garden. Mrs Neighbour came out just at that moment so he didn't want to seem rude by staring in her garden and walked on. I mean, surely neither she nor her husband (in their 60's I think) could have taken it, nor their son who's probably in his 30's. They seem so quiet, respectable, considerate (they take their wind chimes down when it's windy). They just spent lots of money on a new deck, patio, fence and shed. Why would they want a scraggy old bit of trellis? And why steal it from their own neighbour? It couldn't be the same piece, could it? Maybe it just looked similar from a distance. It would be easy to tell close up because our piece was distinctive. It was sawn in half from a larger section and had the edges still sticking out and a lump of wood screwed on to it that was originally used to attach it to my fence (before the winds blew the fence down last year).

I spent an hour last night trawling through old photo's to find a picture of the trellis - It's the same damn piece! Right down to the piece of wood that was painted brown only on one side to match the old fence, but unpainted on the reverse (image on main post).

There it is beside my water butt in preparation for holding the huge long stems from my berry bush). I took it down to give to Mr P when they chopped down his hedge last year and left a dog sized gap beside the gate.

We've not decided on the best way to handle it... just take it back? Question them? Confront them? If yo have suggestions of good ways to do it that will not alienate or escalate relations I'd love to hear from you.

No-one likes to get off on the wrong foot with their neighbours, and because their garden backs onto my garden they are my new neighbours too. I've tried to imagine what possible un-criminal reason they could have for having it there. It's too heavy to have blown over the huge fence. Maybe the wind was making it bang annoyingly? But then you just ask the owner to stabilise it, you don't pinch it. Maybe the kids did take it and left it outside the garden next door, and they didn't realise it was Mr P's? But they've seen it from their window for 3 months and even if they didn't recognise it they must have heard me scampering around saying "I can't believe someone stole the trellis!!!", which would be the perfect opportunity for an innocent person to say "oh, hello, I'm your new neighbour, and we found a piece of trellis at lunchtime". Hmm, can you tell I want a happy ending. I don't want them to be guilty, but the circumstantial evidence is not looking good folks.

I suggest you offer them some plausible deniablilty:

"Oh my - how wonderful - you have my trellis that some children pinched from my garden before you moved in. The little horrors must have thrown it in your garden!

"I hope it didn't do any damage. May Mr. P collect it this weekend, or would another time suit you better?"

All in one go - without drawing breath!

i love the dog whisperer. i have seen and love that show!

Belatedly a very happy birthday to you! Glad you were treated to such mouthwatering&healthy cakes, what a good combination.
Decided to chuck everything else and focus on blog-world today, in 5-minute bits and pieces, write, lie down, sit up, write a bit more, lie down again, etc. It's so good to see what people have been up too. Utterly agree with your comment left on Redredday, we do what's manageable and contacts through this blogging world have made my world bigger and my life fuller.
Thanks for your message a while ago about my poem, would have loved for you to have it on your bathroom wall. You give me so much encouragement, a huge gift to me.

Could you train Lucy to drag it back for you? Or just get her to sit on their doorstep with those beseeching eyes of hers?! XL