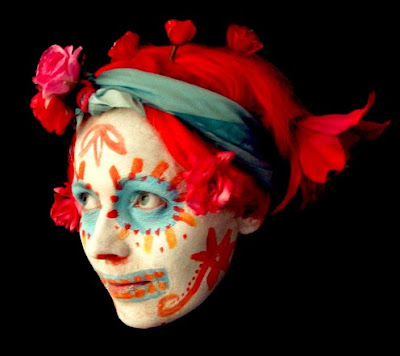 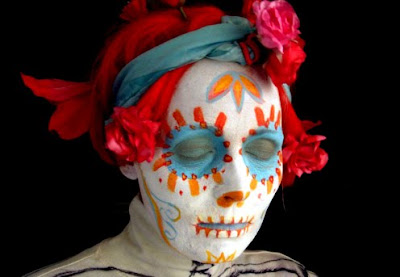 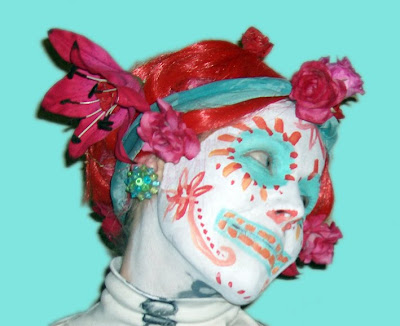 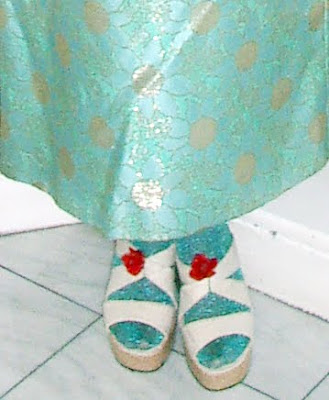 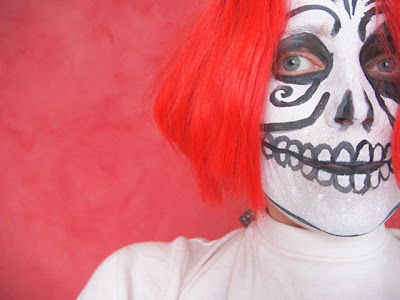 I love Mexican Dia de los Muertos - Day of the Dead. All that colour, art, creativity and food, what a joyous way to celebrate and remember loved ones who have died. Every few years some friends host a Day of the Dead Party instead having a traditional Halloween party. In the early years I started off with simple skulls make-up and a plain red wig but in subsequent years I was inspired by edible Sugar Skull candy and opted for much more colourful face painting and costumes and lots of colourful flowers in my wig to give that true Mexican feel. As always, I did other people's faces first so my own was a bit of a last minute rush, but even messy painting looks jolly when it's in such bright colours. I always enjoy doing them.
Labels: costume, fancy dress, Halloween, my creative life, red, seasonal

thanks lisa, and hello to you too. must pop over to your blog next week and see what fun the little has had over halloween, have a great time. x

Amazing, Cally! What a talent you have...just wonderful.

(Karen - oops, I accidentally delete our comment so I've reposted it as Anon - but thank you).

hi Cally! it was so good to hear from you and see that you're back again on the blog!! we've missed you. thank you so much for the feedback you left me.

you look freakishly beautiful! ;). love the second picture. it makes me think of quiet strength coming from you on top of the bold colors. i only recently discovered what a fun holiday halloween is, seeing the great lengths people take to dressing up and all. growing up in the city, i always dreaded halloween for fear of being bombed by eggs and shaving cream when walking to and from school.
have a fun party this year!

These are beautiful and so creative. Love it!